SEE ALL THE OLYMPIC VENUES LIVE ON LEGACY TOURS - INCLUDING THE OLYMPIC STADIUM, THE VELODROME, THE AQUATICS CENTRE AND THE ORBIT (THE ORCELAR MITTAL TOWER)

BOOK THE OLYMPIC LEGACY WALK BY 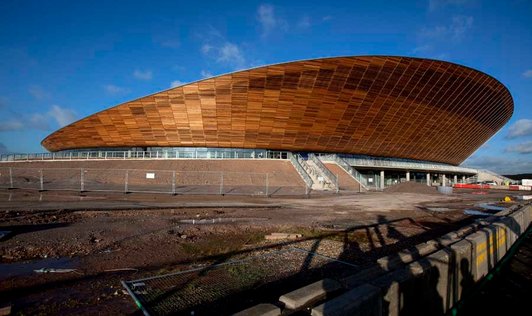 The Olympic Park in Stratford in East London was at the centre of the biggest sports event in the world with the Olympic Games and the Paralympic Games taking place in London in 2012.

THE GUIDED OLYMPIC WALK IN THE OLYMPIC PARK

SEE ALL THE OLYMPIC VENUES IN REAL LIFE AFTER WATCHING THEM ON TV DURING LONDON 2012. Experience the complete transformation of a formerly contaminated and run down area into one of the most modern and desirable areas in London on a guided walking tour in the Queen Elizabeth Olympic Park next to Westfield shopping center in Stratford. Learn all about the history of the Olympics, the athletes, the innovative architecture of the 2012 venues, the regeneration of East London and the sustainability of the 2012 venues. You will see The Olympic Stadium, The Velodrome, The Aquatics Centre, The Arcelor Mittal Tower, East Village as well as gorgeous landscaped brinks of the river Lea.

If you are planning a guided walk for students, you might want to combine it with an activity like swimming in the Olympic pool in the Aquatics Centre or riding a bicycle in the Velodrome or on the BMX track. You can rent bikes in the Velodrome: http://www.nationalcyclingcentre.com/track/ride-the-track/

GUIDED TOUR WITH COACH OR CAR

A half day tour includes The Olympic Park with the imposing building sites of iconic venues as well as views to famous already existing venues like the O2 Arena (Gymnastics and Basketball finals) and EXCEL (Boxing, Fencing, Judo, Table Tennis, Taekwondo, Weightlifting and Wrestling). The guiding will inform you about the Olympics 2012, the athletes, the venues, the legacy of the 2012 Games, the regeneration and the efforts in London to create the most sustainable Olympic Games ever.

A full day tour can be tailored to your wishes with visits to venues of your choice: The Olympic Park, Greenwich Park (Equestrian) with the Observatory and Greenwich Meridian and The National Maritime Museum (www.nmm.ac.uk), Royal Artillery Barracks in Woolwich (Shooting) with the The Royal Artillery Museum (www.firepower.org.uk) or Museum of London Docklands (www.museumindocklands.org.uk). The guiding will inform you about the history of the Olympics, the athletes in London 2012, the industrial history of the area, the multicultural population (which was an important factor in winning the Olympic bid for London), the regeneration of a formerly run down East London to become one of the greenest and most attrative places to live in the future. Find out more: http://www.londonlegacy.co.uk/